The year is 1822, and the President of the United States is James Monroe. Michigan, still 15 years away from statehood, is a wilderness, and outside of indigenous people native to the state, only 500 people live in what is now Oakland County. Half of those individuals live in present-day Pontiac.

It was here God laid it on the hearts of thirteen community members to form a church. And in the summer of 1822, with 17 people present, the very first Baptist church in Michigan was formed. First Baptist Church of Pontiac met in the home of Deacon Gibbs. Mrs. Abner Davis recalled what it was like to attend that very first meeting,

“We heard there was meeting appointed two miles south of our house for the purpose of forming what few Baptists there were into a church. I told my husband I would like to go to the meeting [so we went]…the first obstacle we met was the Clinton River; there was no bridge. A tree had fallen from the high bank, slanting down across the river. Taking hold of my husband’s hand, we succeeded in reaching the other end safely. The first mile there, a wagon had been through; the second was nothing but blazed trees to guide our steps.”

As the church grew, the still tiny congregation moved from the Gibbs’ home to a schoolhouse and then the city courthouse. Year after year, they were faithful in meeting and giving towards a future and more permanent home for their congregation. On February 22, 1839, the church purchased land on the southeast corner of Huron and Saginaw in what is now Downtown Pontiac.

In 1841, their first official church building was built, and during the first year in their new home, membership doubled from 63 to 123. A church record dated April of 1873 reports,

“The history of First Baptist Church of Michigan is a history of trials, but also, and best of all, many successes. Never has God forsaken His little ones, and today we rejoice.”

Following continued growth over the next 55 years, Rev. Frank Barnett found a site for a new, larger church home. Construction of the 700-seat sanctuary began in 1896. Over the next 30 years, the church pastorate was held by many different individuals. By 1916 the church had reached a record-breaking Easter Sunday attendance as 1,250 people packed in the downtown church. By 1927, the church, now led by Dr. Henry Savage, had outgrown its sanctuary. A temporary “tabernacle” was constructed until the current building could be razed to make room for its successor, double in size, to be built. This building still stands in Downtown Pontiac on Oakland Ave. today. 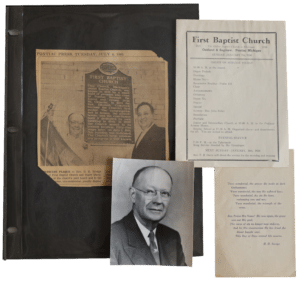 The 1920s and 1930s saw incredible growth, not just in attendees and members but also in innovative ministry. In 1926, morning worship services were broadcasted over WJR’s radio station. In 1937, the church purchased conference grounds near Muskegon, where Maranatha Bible & Missionary Center was founded. Today it is a nationally known Christian conference center. With an emphasis on missions at heart, the church raised support to send some now-famous missionaries, Jim Elliott and Nate Saint, to minister to the jungle tribes of Ecuador in the early 1950s. Many other churches in the Pontiac area were also a part of the missionary vision of First Baptist, several of which are still operating today.

They include Marimont Community, North Perry, Gingellville Community, and Five Points Community Church. Throughout Dr. Savage’s pastorate, over 100 young people were commissioned and supported by the church to the mission field.

In 1961, the church received a plaque during The Pontiac Centennial that read,

“This church is Michigan’s oldest Baptist Church. It was begun in 1821 by a small band of pioneers who came to Pontiac through the forest and swamp.”

Shortly after this building dedication, Dr. Savage retired. Rev. Robert Shelton, the father of Woodside’s own Shari Hulcy [Romeo Campus], who had just returned from missionary service in Vietnam, stepped into the pastorate.

During the late 1960s the downtown area began to deteriorate as people migrated west of the city into newly developed townships. This created the need for additional parking and recreational facilities, which led the church to begin searching for a new location. However, economic adversity began to envelop the US and forced the church to pause its plans in the face of inflation and inadequate capital. Finally, in 1989, the Oakland Ave. location was sold to the Salvation Army and a 62-acre parcel of land on M-59, just nine miles west of downtown Pontiac, was purchased. Here, construction began on a new building.

Unfortunately, the next 20 years of ministry would be filled with trials. As membership declined, the 185-yearold church was about to close its doors.

But God wasn’t done with First Baptist Church of Pontiac.

“Being confident in this, that he who began a good work in you will bring it to completion at the day of Christ Jesus.”

Two hundred years later, the good work that God began in Deacon Gibbs and the thirteen founding members continues. Woodside seeks to be a church where people find belonging in Christ, grow in their relationship with Christ, and reach their world for Christ. And we continue to see stories of life change and revival.

While we do not know what the future will hold, we know Who holds it. We rest in the truth that the best is yet to come. As we look back over 200 years’ worth of history, each piece and page is filled with the same hope. Two hundred years later, we trust it is still only the beginning of what God will do. 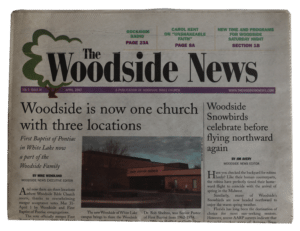 “The rich heritage of our church is built upon faithfulness to the Word of God. Throughout our history we have consistently sought ways to advance the gospel both locally and globally. These goals continue to drive us forward as we pursue fresh ways to communicate the love of Jesus to our community.”

As we celebrate 200 years of God at work and look to the next 200, let us be encouraged by the words written by our sweet sister and church member, Helen Beekman, in 1874,

“In closing this, the history of our church, I would say, although we have a finer church, we should not forget the ones who suffered and deprived themselves, that we should have, this, the first Baptist Church in Michigan and we may well take example from their lives, and by faithful work for Christ, will have many stars [jewels] in our crown.”

Let us continue to be a church who demonstrates the faithful work of Christ for generations to come. In the words of the late Rev. Robert Shelton,

“To God be the glory, great things He hath done.”